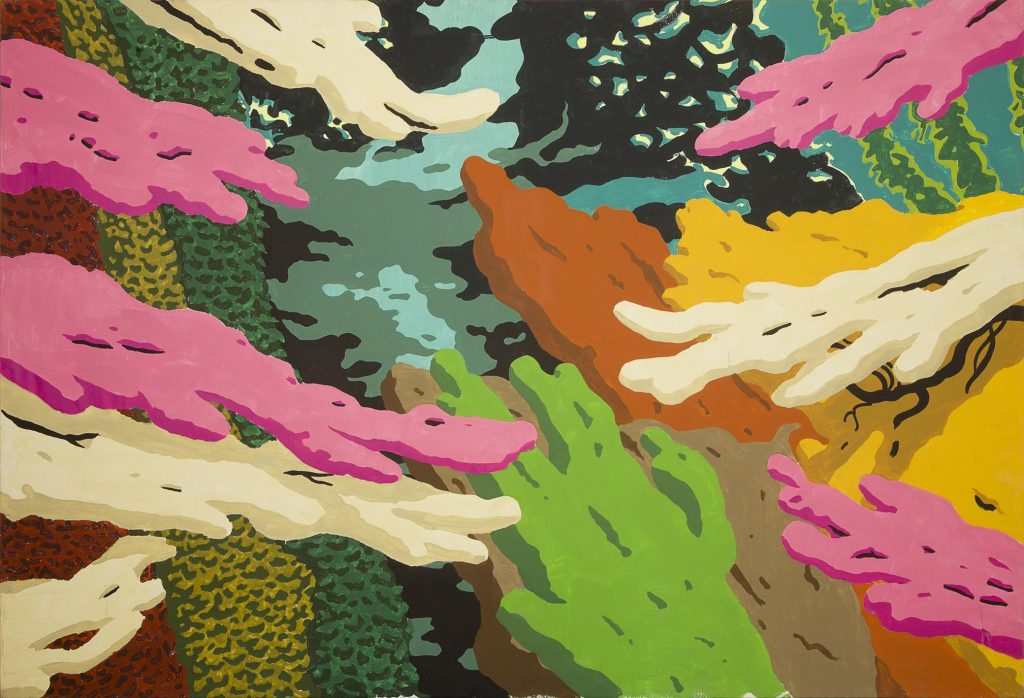 For the first time, three of the most prominent Ukrainian contemporary artists present their work in the Geneva region.

Open Air means freedom, unbound open space and infinite freedom of choice. A key idea of the exhibition is exploring the clash between the human and the technological dimensions, the natural and the artificial. Oleksiy Sai is adapting an office computer technology (Excel) to a story about the everyday life of an invisible big corporation clerk – the so called office plankton. Nazar Bilyk applies synthetic materials to the most tactile art form, a sculpture. Ksenia Hnylytska experiments with a traditional landscape painting using psychedelic and unnatural colours that refer to aesthetics of the man-made world. Together, these artists perform a new “digital” aesthetic and show а new kind of beauty in which we live.

Nazar Bilyk is a contemporary sculptor who explores the boundaries of the visible space by the potentiality of sculpture. He analyses properties of the form and its interaction with space. He experiments with different materials such as bronze, steel, glass, and various polymers. Analysing space, form and light, Nazar Bilyk also studies their interaction with the consciousness of the viewer, which, along with other means, becomes a plastic material for a sculptor.

Intelligent mix of tradition and innovation is a peculiar Bilyk’s feature. In his works, he addresses a human exploring relations with society and environment. Nazar often uses a converse space technique and tries to get closer to the origins of substance and shape.

“Traditionally, sculpture works with timeless space. Contemporary sculpture rather speaks about pre-time space and its dissociation with time. […] He explores the boundaries of the visible, which always slip away from him and remain undefined. The project unfolds like an eternal act of reflection, when one question becomes a departure point for the other one.” (Olga Balashova, PhD, art critic).

Ksenia Hnylytska works with in various media, with painting to be the most important one. Beside artistic practice Ksenia also performs as a civil activist. She co-founded the artist group R.E.P. (Revolutionary Experimental Space) known for its politically conscious artistic statements. As an individual artist she participates in numerous biennials, solo and group exhibitions. In her painting practice, Ksenia combines social and political subjects with formal experiments and decorative motifs.

“In Open Air series her canvases are coloured in bright patches. The first impression is of abstraction. It is misleading. […] It is simply that the initial subject – specifically landscape – is reduced by the artist almost to abstraction in order to create a new psychedelic world… […]. On top of that thanks to the unusually palette of colours, the abstract structures don’t melt into one another, the pictures recall collages and computer graphics. Which is to say that they instantly fit themselves into the context of the art of 21th century”. (Alexandra Rudyk, art critic, journalist)

Oleksiy Sai links independent artistic practice to his office experience. Sai believes that it is difficult to access the scale of today’s global culture using traditional means of art. Trying to find a relevant visual language to describe contemporary processes, he makes a series of works in the application for counting money – Microsoft Excel. His heroes are countless managers who are doing their jobs on a daily basis without coming into contact with reality. He uses data as an element of his visual language that can be clearly interpreted by a person from the corporate world – perhaps the youngest of the well-defined cultures of humanity. Acid colours and computer patterns from his images are easily recognisable from office routine and fit aesthetically into the space of a large city full of promotional images, neon signs and lights. But it is not the bare form rather the content behind it that interests Sai.

Kateryna Ivanova is an independent cultural manager. She establishes partnerships between Ukrainian cultural art institutions and actors and European institutions, organises art events with artists from Ukraine and beyond and advocates of Ukrainian contemporary art in Europe.

Kateryna has a background in government relations and public policy field and management of global projects. She is based in Geneva and Kyiv.

Saturday – Sunday 10am – 7 pm and also by appointment

Nazar Bilyk was born in 1979 in Lviv. In 1999 he graduated from Institute of Decorative and Applied Art and Design named after M. Boychuk. In 2005 he graduated from the Sculpture Department at the National Academy of Fine Arts and Architecture.

In 2010 Nazar won a contest for young Ukrainian artists MUHi. Later in 2013 he was awarded a President grant, project “Counterforms”. Nazar also works as a lecture in National Academy of Art and Architecture, Kyiv.

Nazar lives and works in Kyiv.

«Out: Neurodiversity», Мuseum of Modern Art of Ukraine, Kyiv, Ukraine, 2011

Ksenia Hnylytska was born 1984 in Kyiv. She graduated in 2009 from the National Academy of Fine Arts and Architecture in Kyiv.

Since 2002, Hnylytska is a co-founder of the Ukrainian artist group R.E.P. and participates in their numerous exhibitions, projects and activities. Her works have been shown in several exhibitions at the National Art Museum of Ukraine, Visual Culture Research Center in Kyiv.

She also works as a curator, independently and as a member of the curatorial group Hudrada. She was a resident at LIA – Leipzig International Art Program at 2008.

Ksenia lives and works in Kyiv.

Museum of the City Svetlograd, Lysychansky Museum, in the framework of De ni-de, Lysychansk, Ukraine, 2017

«Between the Volga and the Danube», Aircraftgallery, Bratislava, Slovakia 2016

«Land rights: to be responsible for resources, the association «rotor», Graz, Austria, 2009

«This Pro within Biennale for Young Art “Stop! Who are talking?” », State Centre for Contemporary Art, Moscow, Russia, 2008

Revolutionary Experimental Place, Gallery of the Center for Contemporary art

«Beyond the Threshold», Museum of Youth, Yekaterinburg, Russia, 2002

«Two Sides», Gallery of the Centre for Contemporary Art at NaUKMA, Kiev, Ukraine, 2000

Since 2001 he quickly entered the field of contemporary art and he is now renowned as a founder of Excel-Art. Besides Excel, Oleksiy includes other segments of the corporate world designed to be means of communication, but not as an artistic language. He also creates installations, art objects, digital art and graphics. His work is represented in the collections of auction houses such as Phillips de Pury, ArtCurial and also in private collections within Western and Eastern Europe.

«I am a drop in the ocean» Kunstlerhaus, Vienna, Austria, 2014
The show within the show, Mystetskiy Arsenal, Kyiv, Ukraine, 2014